A Prayer for Peace 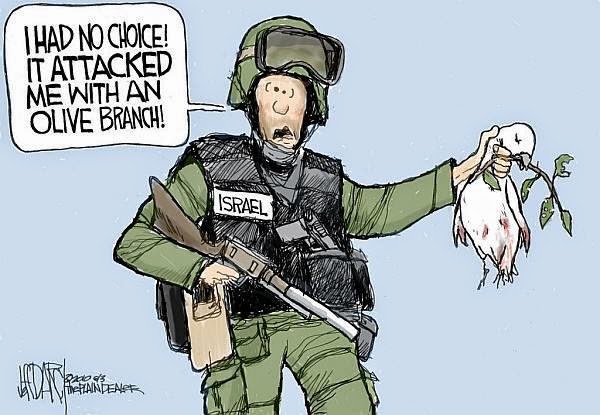 Sadness and frustration fill my heart as the horrific attack on Gaza enters its third week.  With every story I read about what is really happening there, the sorrow overwhelms me.  I flip through pictures of dead bodies and destroyed buildings and shut my eyes – in prayer, but also to deflect the images.  Then, when I catch a glimpse of “mainstream” news and hear stories slanted to the “poor Israel has to defend itself,”li(n)e, the frustration takes hold.

This morning I was in a coffee shop in Los Angeles where the TV station was tuned to a CNN interview with Netanyahu, sounding ever so “reasonable” as he explained to Wolf Blitzer that, of course, Israel had to defend itself against these “terrorists” – and that we in the US would certainly do the same!

My first impulse was to throw something at the TV screen (mature, right!?); my second was to request that the channel be changed.  Not happening – and, even if it had, nothing would have really changed.  All the Zionist-controlled and funded US media are running their own variation of the same story.  “We don’t target civilians; Hamas is using civilians as a shield; we are humane…”

But what, to me, is even sadder and more frustrating is friends, family and people who I otherwise admire and respect who not only “don’t get it,” but don’t try to “get it.”  What is it about otherwise normal, intelligent people – who are usually very liberal on issues such as immigration or gay rights – who turn Fascist at the mere suggestion that Israel might be a bit heavy-handed in Gaza?

Just this past week – mostly in reaction to my Facebook posting that I had participated in a “Stop the Violence in Gaza” rally – two clergy people took issue with my “one-sidedness,” as did several other FB “friends”.  Later, as I listened to an NPR interview on the subject while visiting a friend, I remarked, “too bad that even NPR can’t present both sides.”  My friend suggested that we not discuss this topic because, clearly, we held different views!

I was feeling pretty “down,” when I received an e-mailed prayer, which I’d like to share.  I have no idea what news the sender is listening to, or which “side” she is on – but I love her for sending it because she so perfectly expressed what I am feeling

I come with a hurting heart for you as I learn of more and more conflict in Israel.  I know a bit about leaving your heart in a place that is special to you --- and then what it feels like when that heart is broken.  Please know that I am sending many prayers for PEACE and this is for you as well as for the people so affected by all this.  Your time of service and continued efforts are so appreciated.  Be strong and let me hear from you along the way.
Love and Blessings!