I recently had the privilege of attending a conference on “Walking With Palestinian Christians (for holy justice and peace). “  The conference was put on by the United Methodist Church and was reported to be the largest single-issue conference that church has ever held.   As a life-long Methodist, I have at times been both proud and exasperated of my church for its stands on social justice issues, as it attempts to follow the tenants of (Methodist “founding father”) John Wesley to “do all the good you can for all the people you can…”

We, as a church, have marched with civil rights activists in the Deep South; we have demonstrated against South African apartheid; we have often spoken out for those with no voices.  Despite individual churches and larger denominational group’s voices to the contrary, we have also (as a denomination) refused to allow equality for our GLBT brothers and sisters, and have been reluctant to adopt legislation that would have an impact on ending the Israeli occupation of Palestine.

Last week’s conference brought together Methodists (and others) ranging from those wanting to learn more about the “situation” in Palestine/Israel, to activists who have and will continue to push for divestment of church monies (most notably the very large pension fund that provides benefits for retired clergy and other church employees) from companies that directly assist the Occupation.

Church leaders spoke to the work they were doing to educate those well-meaning people who are not aware of or do not understand the issue.  Palestinian Christians spoke of their everyday lives under occupation.  And those of us who were there to listen and learn came away inspired to do more, to push harder, to help bring understanding to those well-meaning people who honestly believe that God gave the land to the Jewish people and none others.

I’m not a religious scholar and I haven’t memorized the Bible. I can’t pull quotes out of context to make a point.  My Christianity is of the “garden variety” – God loves everyone, do unto others as you would have them do unto you, even the overused “What Would Jesus Do?”  I see the church (any church) as a means to do good, a way to demonstrate God’s love by actions (which, after all, do speak louder than words!).  My God is not a real estate broker; he is a God of peace.

So where do we, as a church, as individuals who believe in justice for all people, go from here?  “Come and visit; see and help,” begged Alex Awad, Dean of Students at Bethlehem Bible College and a United Methodist missionary.  Indeed, those of us who have spent time in the Holy Land – not on a sterile “tour,” but visiting real people on both sides of the Wall - report it to be a “life-changing” journey. 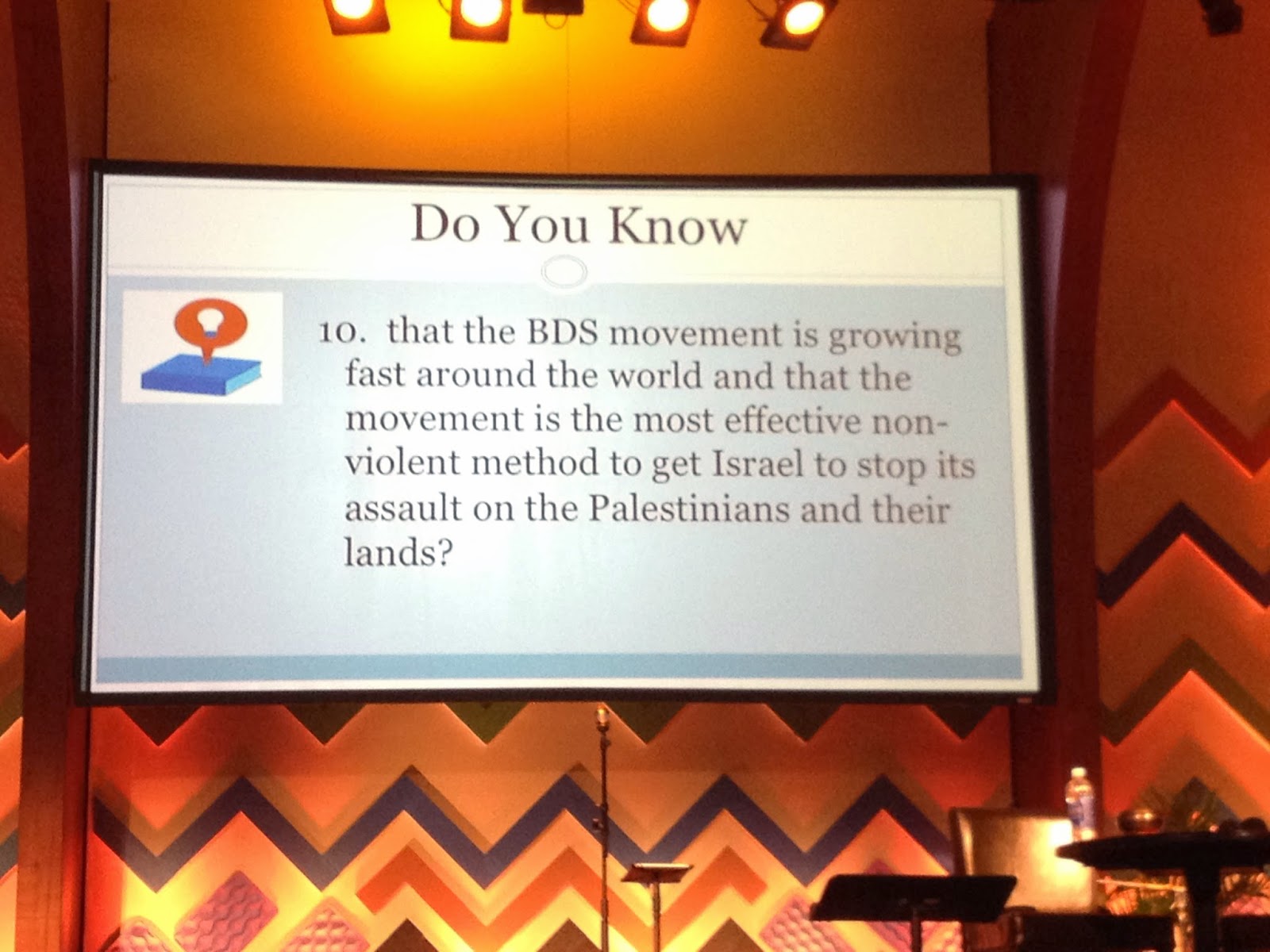 Conference speakers also implored their audience to work with the growing Boycott Divestment and Sanctions (BDS) movement, started by Palestinians in 2005.  Currently, the Methodist church supports divestment from products made in the settlements, while motions to divest from businesses that support the Occupation remain on our “to do” list.  Maybe in 2016, when the church holds its quadrennial meeting in Portland?