A Rally for Gaza


In Gaza, a reign of terror.  Here in the safety of my American home, sadness.  I’ve never been to Gaza – the closest I got was the Israeli border town of Sderot, where an Israeli peace activist talked to my EA group about her sadness for her Palestinian friends in Gaza, while describing life in a city that has been described as “the most heavily fortified in the world.”

In Sderot, every house has a “safe room;” every bus stop is a bomb shelter and even playgrounds have shelters as play structures.  It’s a horrific life, she said, but nothing compared to what her Gazan “neighbors” go through.

In Gaza, there are no bomb shelters.  (There are probably no playgrounds either, but that’s another story for another day!)    High tech weapons (many US made) go screaming over the walls into Gaza, and the people have nowhere to run – nowhere to hide!

“Operation Protective Edge” sounds so benign, so innocent.  “We have to defend ourselves,” the Israelis claim – and the US buys into that lie, just as it has bought into virtually every lie that Israel has been telling the world since 1948.   This disproportionate reality of hand-held rockets against drones and other state-of-the-art weapons is not mentioned, nor is the fact that the Israeli military is on record as stating that their intention is to “cleanse” Gaza – civilians, children and the disabled be damned!

My sadness is for the situation, of course, but also for a US government that turns a blind eye – and to the American people who will never learn the truth because of the biased reporting of the media.

Occasionally, there is a small bright spot – and yesterday was one of those days. Several local organizations, including local chapters of Students United for Palestinian Rights, Americans United for Palestinian Rights, and Jewish Voice for Peace organized a rally, calling for an end to the violence.  On a sunny summer afternoon, about 200 protesters gathered in a downtown park to carry signs, shout slogans and, finally, read the list of those who have died in the latest round of violence.

As of this morning (Sunday), 146 Palestinians – many of them children – have been killed in the Israeli attacks on Gaza.  No Israelis have been killed by the Palestinian rockets that they are defending themselves against (although a few injuries have been reported).  Yet the attack continues and is reported to be escalating as Israel threatens a “ground attack” to accompany the continuing blasts from above.

Reaction to the rally ranged from honks, thumbs up and the occasional waving of a keffiyeh from a car window to shouts of “Muslims go home!” from passersby.  Still, the local newspaper – hardly a bastion of liberal reporting – carried a brief story about the rally and, for a few hours anyway, those of us participating felt we were a part of something bigger – something that just might make a difference. 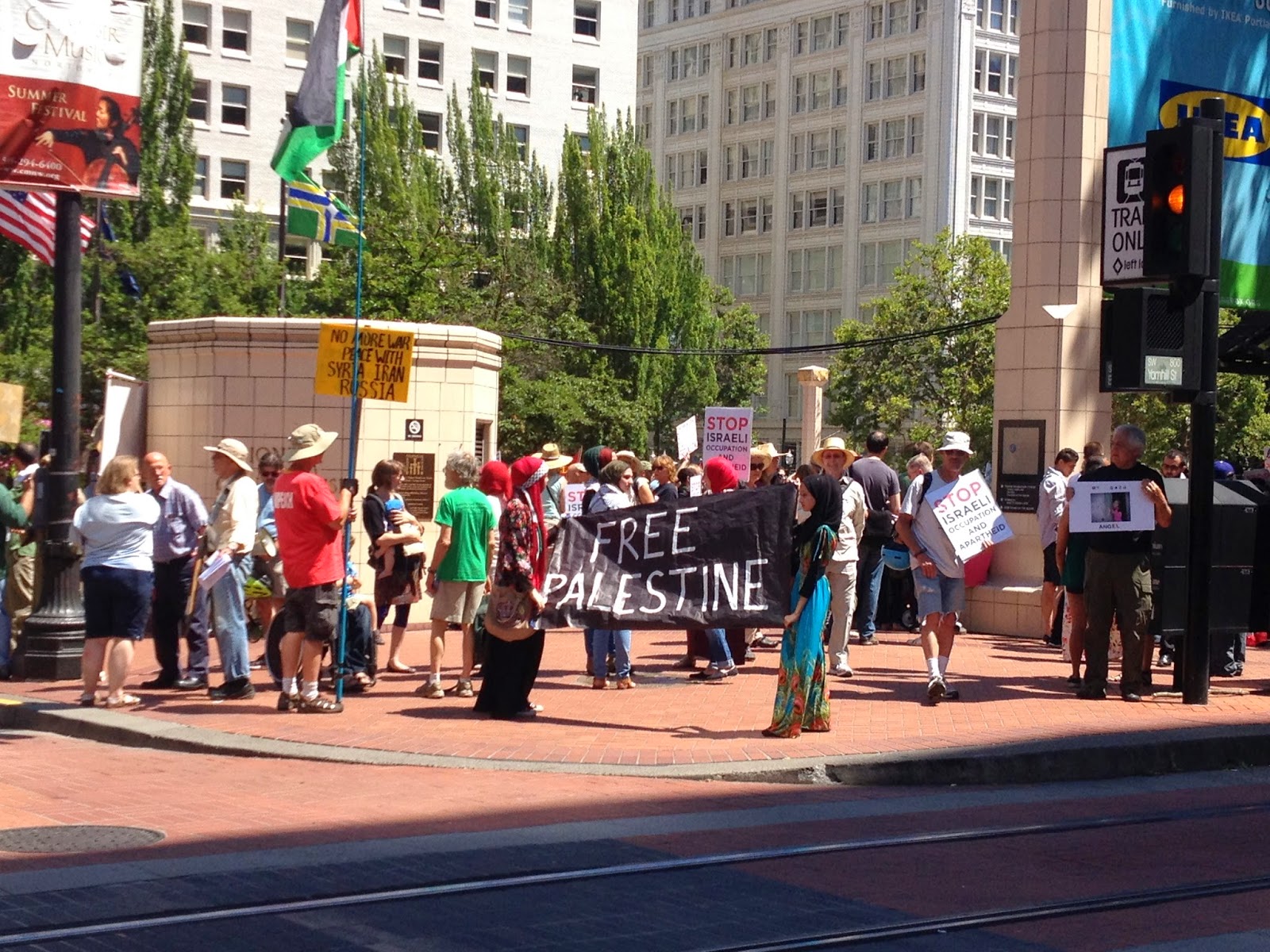 I’m heartened to read of similar rallies in other cities across the globe, and can only pray that, with awareness, will come the awakening of a conscience that has been too long dormant!