Too Small for Walls

My recent vacation travels took me to northern England, where a friend and I walked a substantial portion of the route of Hadrian’s Wall, and then on to Berlin, where the Berlin Wall lives on - in spite of having been torn down 30 years ago.  Both experiences awakened memories of the time I spend in Palestine, looking at the “Separation Barrier” from a number of different perspectives, passing through its numerous checkpoints and monitoring those same checkpoints as a human rights observer.

The Roman Emperor Hadrian ordered his soldiers to build a wall, intended to keep the “marauding barbarians” from the north from invading Roman-occupied Britain in the south. Construction on the Wall was begun in 122 AD, and it was completed some seven years later.  It stretches just over 70 miles (we walked about 50 of those miles on our week’s visit!), and was a masterpiece of engineering.  Parts of the Wall were as high as 20 feet (including ramparts) and its route also included lookout towers (every 1/3 mile), mile castles (every mile!) and Roman Forts (about every five miles).

While much of the Wall was dismantled for use as building materials after the Romans abandoned it, enough remains to give visitors a good understanding of the structure of the wall and its importance as a military boundary – as well as the opportunity to re-visit some early history while observing stunning views of the English countryside.  It also was a powerful illustration that, even 1900 years ago, the strong wanted to “protect” themselves from the “outsiders!”

The Berlin Wall is, of course, a piece of modern history – and the emotions it evokes much fresher!  A 4,000 foot section of that Wall has been preserved as a memorial, the East Side Gallery, where contemporary artists have painted portions of the Wall.  Wikipedia describes the Gallery as, “monument to the fall of the Berlin Wall and the peaceful negotiation of borders and conventions between societies and people.”

That got me to thinking about the differences – and the similarities – between Walls.  Hadrian’s Wall was built to keep “the other” out; the Berlin Wall was built to keep the people in.  And the Separation Barrier between Palestine and Israel serves both purposes – it keeps the Palestinians OUT of Israel and IN Palestine, while at the same time doing nothing to keep the Israelis and settlers OUT of Palestine!!

My favorite souvenir of my Berlin visit is a refrigerator magnet with the words, “The World's Too Small for Walls,” and it appears that, there at least, there exists a common understanding that Walls are not a solution - a lesson yet to be learned by Israelis and American politicians alike! 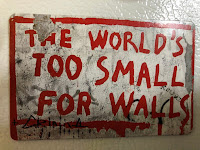