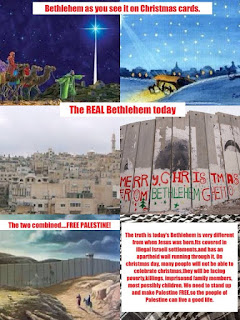 Things were bleak in the little town of Bethlehem.  An oppressive ruler, worried about losing his power, was killing children.  There was inadequate housing for the people crowding into the village and visitors who traveled long distances had difficulty finding their destinations.

2015 AD or 2000 BC?  Well, not much has changed, has it?  The “Little Town” that we sing of at this time of year has gone from the Roman Occupation of Jesus’ day to the Israeli Occupation of today.  Modern-day pilgrims don’t have to settle for lodging in a stable – the quality hotels that line Bethlehem’s streets are far from full as the threat of “terrorism” makes Bethlehem and the rest of the Holy Land a less-than-desirable place to spend Christmas this year.

Stories flood the media about “terrorism” in the Middle East.  From ISIS to Palestine – all seem to be lumped together to be tarred with the same ugly brush.  And, at least here in the US, those who read those stories are convinced that the Middle East is a dangerous place, filled with terrorists who want to kill them!

I’m not here to say that ISIS isn’t a very real threat – or that its members do not, indeed, wish to wreak havoc with Western lives – and Western lifestyles.  But to include Palestinian children who may (or may not!) throw stones at an oppressive Israeli army with men and women who spend weeks or months training for their missions of evil, is to minimize the real danger, while creating an atmosphere of fear and distrust of every woman who wears a hijab, and every young man who speaks Arabic.

It is not surprising that a right-wing “nutcase” wants to ban all Muslims from the US, while not understanding that such action only throws fuel on an already crackling fire.  But it is surprising – and sad – that so many people support policies like this, ignorant that they are creating the best recruiting tool that ISIS could hope for! 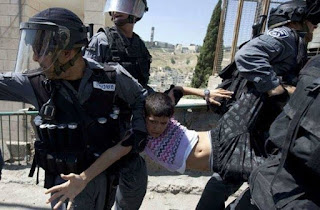 And back in Bethlehem, when children are arrested or detained for no reason; when houses are demolished because a relative of the residents is suspected of “terrorism;” when walls and checkpoints restrict movement and businesses are confiscated by the Israeli government – when the flame of hope flickers – and then is extinguished – what is left?  Perhaps a few will become desperate enough to join ISIS.  Most will continue to endure – and to pray that we in the West will finally – FINALLY – see their plight and cease to support their oppressors.

The manger is still there; the stable awaits a holy birth.  But what kind of world is that baby coming into – and what can we do to make that world a better place?
Posted by Dee at 8:29 AM