Long-term readers of this blog will know that I have a long-standing love affair with the Palestinian town of Sabastiya and its connected archeological site.  I first visited Sabastiya as an EA in the spring of 2013, when the residents were holding protests over settlers dumping raw sewage on their farmland (“Sabastiya, Settlers and Sewage,” March 26, 2013).  When the protests resulted in the cessation of the sewage dumping, I rejoiced with the townspeople (“Sabastiya, A Happy Ending,” April 7, 2013).

Sadly, our joy was short-lived when, shortly after my return to the US, the “new” EAPPI team was called to Sabastiya because of a fire that had destroyed many of the village’s olive trees (“A(nother) Sad Story from Sabastiya,” June 30, 2013.)

On subsequent visits to Palestine, I have always make a point of introducing Sabastiya to the people with whom I am traveling.    Because of this connection, I was made an “honorary” member of the Hanwell (UK) Friends of Sabastiya, and had the pleasure of meeting some of their members on a recent trip to London.  It was on the Hanwell Facebook page that I first learned that Sabastiya is now facing further challenges – these related to the archeological site that has played such an important part in the village’s history – and could plan an important part in their future if it weren’t for the over-reaching greed of the settlers in the area and, ultimately, the Israeli government.

Ahmed Kayed, a village leader who has become a friend over the course of my frequent visits is always willing to give “walking tours” of the archeological site to the travelers I bring with me.  On my last visit, this past February, he briefly alluded to “activity” on the part of Israeli archeologists and soldiers, who have fenced off a part of the site and appeared to be moving dirt in another area.  He also told our group that the Israelis had forbidden the locals to pick up trash on the site – a warning I found incomprehensible. 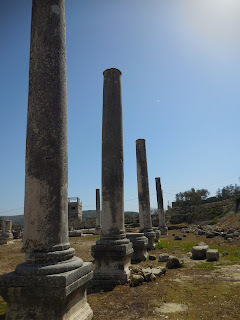 Recently, Kayed posted an article from an Israeli archeological publication titled “The Political struggle over the future of Tel Sabastia” (http://alt-arch.org/en/the-political-struggle-over-the-future-of-tel-Sebastia/).  In the first paragraph of this article, the author opined, “The struggle for Sebastia is central to strengthening the Israeli presence in the West Bank and to the realization of the aim to return to the Homesh settlement, evacuated by Israel in 2005.”

Never mind that this is a site of great archeological importance (Kayed told our February group that, in 1965, Sabastiya was the most-visited tourist destination in the Middle East!) that deserves care and attention.  And never mind that the Israeli government has done its best to keep this treasure off the world’s “radar screen” ever since it seized control of the West Bank in 1967.  Now that the settlers have begun to visit, let’s take it over and “Judaize” it! 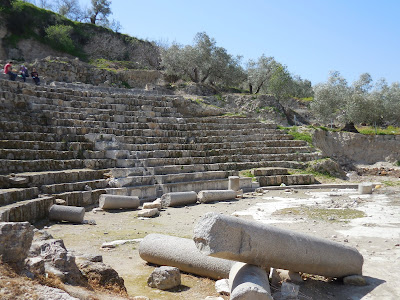 Of course, the site deserves attention.  But that attention should come from international archeologists, who will give equal weight to all of their findings, rather than to Israeli archeologists with the set agenda of finding ways to tie it to early Judaism and the “Kingdom of Israel.”  And let's not forget - the land is in Palestine – the Occupied West Bank – NOT Israel!
Posted by Dee at 10:31 AM