I’m spending a few weeks in the UK – where the biggest news story is the hundreds of thousands of refugees from war-torn Syria making their way to Europe to escape the devastation in their homeland, and to find asylum in one of the European countries.  Not surprisingly, the arguments I hear on the radio and read in the press range from humanitarian (“Of course we have to help these poor people”) to pragmatic (“Where will the resources to feed and house them come from?”) to hostile (“This is not our problem!”)  Not surprisingly, many in the latter group blame the US for much of this “problem.”

I don’t know enough about the entire situation to comment as intelligently as I’d like to – why is Germany able to open its borders to all who need help, while the UK is only now (after the publishing of a horrific photo of a drowned child) reluctantly agreeing to take a limited number – and that only under specific conditions?  But the humanitarian crisis, of which I am only seeing the proverbial “tip of the iceberg” makes me wonder – why hasn’t anyone suggested that the US take in some of these refugees? 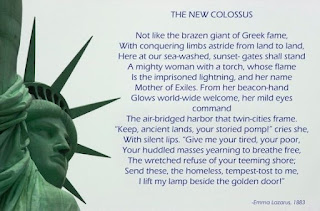 “Give me your tired, your poor – your huddled masses yearning to breathe free…”  The last time I visited the Statue of Liberty, those words were still on display.  And yet, today, not only is the US leaving the entire “refugee crisis” to Europe, we have pulled the “welcome mat” out from under the feet of those who seek refuge from economic situations closer to home.

In the swearing off further discussions of the 2016 Presidential candidates, I note that a discussion of immigration certainly seems to be playing a significant part in that process.  And I wonder – who among us is a “native?”  Who can claim ancestry that goes back to the founding of a country – any country?

My “American” roots only go back two or three generations – my paternal grandparents were both Scandinavian immigrants, while my maternal grandmother was conceived in England, and my maternal grandfather was first-generation German.  Where would I be – where would any of us be – if the US had not welcomed those early “immigrants” to Ellis Island and other points of entry?

Inevitably, when talking about refugees, my thoughts – and my heart – goes to the 750,000 Palestinian refugees of 1948 – those forced from their homes to fulfill Israel’s dream of statehood.  How many of their descendants are among the refugees who have fled present-day Syria – becoming refugees yet again?

And how long will it take for the world to wake up – to realize that we are all strangers here – and we all deserve a helping hand?

Note:  In the 24 hours between drafting this post and preparing to post it, I did receive an e-mail from one of my human rights list-serves, suggesting a petition to Congress to take some of these refugees into the US: https://petitions.whitehouse.gov/petition/authorize-and-resettle-syrian-refugees-us
Posted by Dee at 12:36 AM