A Visit to Modern-Day Bethlehem 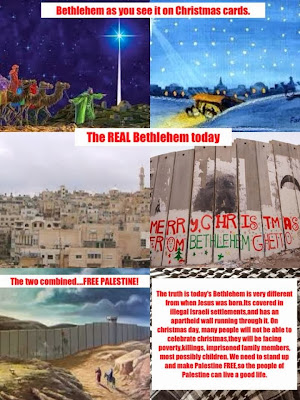 I saw this graphic on Facebook recently.  It was posted by a “friend of a friend,” a Palestinian woman from England who, like many, cannot visit her homeland.  With her permission, I had the graphic printed on Christmas cards, which I am sending to people who will understand the message, as well as to people that I hope will at least try to understand the message.

Most of us will sing – or listen to someone sing (even if it is the Muzak in the mall) “O Little Town of Bethlehem” at this time of year.  For most, the vision that it brings is the one at the top of the card – the slumbering village, the starry skies.  But for me – and for those, like me, who have spent time in the “real” Bethlehem – the image is very different.

When I think of Bethlehem, the first visual image that pops into my mind is the encircling wall.  No, it’s not a “fence” or a “security barrier,” it’s a WALL!  Maybe because so many visitors enter Bethlehem in spite of the wall, the wall here is a colorful canvas for a variety of graffiti artists to ply their craft.  Don’t be fooled – it’s still a wall, and it still keeps people imprisoned behind it!
Another image is the Church of the Nativity – not just as a place of holy pilgrimage, but as a place of siege where, during the Second Intifada, Palestinian civilians were barricaded behind its walls while Israeli soldiers fired live ammunition, hurting people and damaging walls and statues.

And then I think of the children.  The school children in Tuqu’, who needed protection from soldiers and settlers as they went to school – protection that was provided by my EA teammates.  The babies, who are born, not in a peaceful manger but at checkpoints, where their mothers were denied access to the medical care on the other side.

One final image, the most horrific of all, is the checkpoint.  One of the busiest checkpoints in the West Bank, every morning thousands of men (and not a few women!) must pass through this cage-like structure to get to jobs in Israel. 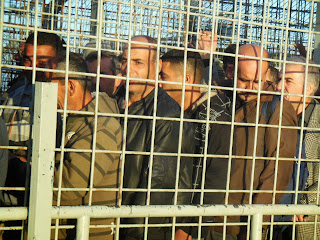 In short, the reality of Bethlehem – circa 2013 – bears no resemblance to the Bethlehem of 2000 years ago, when a baby lay in a manger, and angels sang overhead.  This holiday season, when you think about that first Christmas, and that tiny baby in his Bethlehem manger, please spare a thought for the people of Bethlehem and their struggles to survive in the face of oppression and occupation!

p.s. I made a donation to MAP (Medical Aid to Palestinians) as a thank you to the artist who created the Bethlehem graphic.  If you’d like to do the same, their website is http://www.justgiving.com/MAPChristmas
Posted by Dee at 9:36 AM