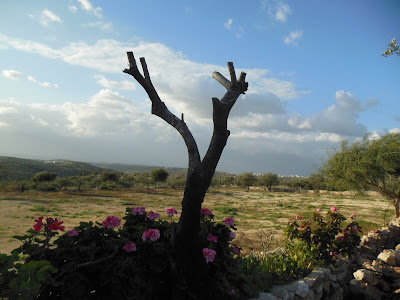 Recently, while doing a presentation about my experiences in Palestine, I was asked, “What kind of a change did your time there have on you?”  It isn’t the sort of a question one expects from a stranger – it isn’t even the sort of question that family members and friends have asked me much.  And I’m not sure my spur-of-the-moment answer - something about having been told it would be a “life changing” experience (which it certainly was!) - could possibly cover the impact that Palestine had on me!

During “de-briefing” – both in Jerusalem and in Washington D.C. – we were told the symptoms of “post-traumatic stress” syndrome, and given practical “hints” on how to deal.  I thought I did pretty well in those early days – if you can disregard the tears when I tried to relate some of the sadder stories, head-shaking about people who didn’t “get it” and an obsessive need to explain the entire Palestine/Israel “situation” to casual acquaintances (in 50 words or less!).

Not surprisingly, I soon recognized that many people – probably most people – weren’t all that interested, either in my personal experiences, or in the “big picture” of what life under Occupation was – either for me in the short term, or for my Palestinian brothers and sisters in the long term.

Most people have their own lives to live and their own concerns to deal with.  Whether these concerns were of a personal nature or a “cause” in which they believed as strongly as I believe in ending the Occupation, I soon realized that I couldn’t expect them to embrace this issue with the same fervor that I did!

But how did this experience change me?  Well, I realized while still there that I liked being outside my “comfort zone;” I liked dealing with new challenges!  I had to do things that I didn’t really want to do (who wants to get up at 3:15 am for checkpoint duty?), but I also did a lot of things that expanded my horizons.

I learned to approach “strangers” and listen to what they had to say (sometimes directly and sometimes through an interpreter!).  I sat in front of a computer and forced myself to write – reports, blog posts, letters – and re-discovered the joy I found in expressing myself in writing.

Now that I am home, and am involving myself in “advocacy,” I find myself feeling much more comfortable about approaching people to ask for things (“Would you like me to come speak to your group?”) and, indeed, to speak to “strangers,” be they in large groups or individually.

The “pep talks” I give myself are along the lines of, “What are you afraid of?  You were doing this in Palestine and you didn’t even speak the language there!”

I also find I am more empowered to speak to issues that concern me – and not to worry what other people think.  But, at the same time, I find myself listening more, and talking less, trying to see where the other person is coming from instead of jumping in with my opinion.

Patience, which was never one of the virtues with which I was blessed, has entered my life.  No longer do I tap my feet and breathe out sighs of exasperation when waiting for someone or something.  I find I can sit quietly and just think (is this meditating?), enjoying the feeling of the sun on my face or watching people as they walk by me.  Again I am reminded of the Palestinians.  If they can remain patient after 65+ years of waiting for a homeland, I can wait 15 minutes for my lunch date or bridge game!

Reports of a child being arrested, a community being demolished, an olive grove being burned can still move me to tears – followed by a rush of anger.

How dare they?!  And why does my country continue to be complicit in these "war crimes"?
But then I remind myself of what I said before I left on this journey.  “If I can move just one grain of sand on the beach at Tel Aviv, I’ll feel I’ve accomplished something.”  And I did.