Back in the 80’s, Oregon Governor Tom McCall became famous for posting signs on the major highways leading into his state.  “Welcome to Oregon – Now Go Home!” was the message they carried.  The governor was trying to make a point – he wanted tourists to come and visit, but he didn’t want the state to become overpopulated.

I thought about that message – albeit in a different context - when I learned how the Israeli government was treating visitors who landed at Ben Gurion Airport (and, to a lesser extent, at the Allenby Bridge border crossing from Jordan).   Reading these reports, and talking to some of the people involved, it became obvious to me that Israel does welcome tourists – but only certain tourists.

Church “pilgrimage tours” organized by Israeli tourist companies that mostly stay in Israel proper (with maybe a quick, well-chaperoned stop in Bethlehem) are warmly welcomed.  Christian clergy, coming to learn more about the Israel/Palestine “conflict” and maybe visit colleagues in the West Bank?  Welcome to Israel – and, by the way, please sign this paper that says you won’t visit the West Bank.

Volunteers coming to work with one of the numerous NGOs who are working for peace in both Israel and Palestine?  Hours of questioning – and a good chance of being denied admittance.  Palestinian Americans (i.e. US Citizens who happen to be of Palestinian heritage) coming to visit family or see their homeland?  Forget it!  Chances are good that the only glimpse of their homeland will be the inside of an interrogation room until they are sent back to the U.S.

Coming into Ben Gurion Airport in October of 2012, and again in February of this year, I didn’t have any problems.  Caucasian senior citizen, grey hair and wearing cross – I looked the part of a pilgrim and was admitted without questions.  My Peruvian EA teammate – twenty-one-year-old dark-skinned male?  Five hours of questioning and having his luggage searched before he was admitted.  (Not to mention additional interrogation every time he crossed a checkpoint between Palestine and Israel!)

I’ve heard anecdotes about Israeli’s draconian entry (and exit!) policies from many different sources – but when I heard that my own government was about to aid this “institutional racism,” I had to mount my soapbox!

I write today to draw attention to legislation that is currently pending in the US Congress.  As international travelers may be aware, the US has a “visa waiver” program that allows visitors from other countries to enter the U.S. without first obtaining a visa.  This is a reciprocal program – which is to say that the participating countries have agreed that they will admit US citizens without a visa.  So far so good!

Enter the US-Israel Strategic Partnership Act of 2013 (SB 462), introduced by Sen. Barbara Boxer (D-CA), and co-sponsored by 40 senators, including my very own Sen. Ron Wyden (D-OR).  This bill would allow Israel into the visa waiver program – but with a difference.  Israel would NOT have to allow all US citizens into Israel; they could refuse to admit those who they deem a “security risk” (i.e. Palestinian Americans, peace activists – even clergy).  Israel would be the only country of the 37 currently in the visa waiver program that would be allowed to make this distinction. 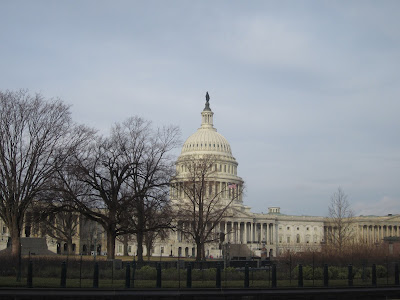 Because most people do not closely follow the day-to-day doings of the United States Congress, I share what I know about this proposed legislation in the hope that Americans reading this post will contact their elected officials to let them know that they do not want Israel to receive “special” treatment – especially when such treatment results in discrimination against our own citizens!

Let’s show the politicians that AIPAC isn’t the only voice out there – we care and we vote!  Call, e-mail, and write YOUR elected representatives – TODAY!!
Posted by Dee at 4:00 PM