Up in “the north,” where I spend most of my time, it’s a wire mesh fence, about 10 feet high, topped with razor wire, and interspersed with “security” gates.  Here in Bethlehem, where I’ve been spending a few days on a “placement visit,” it really is a Wall – almost 30 feet of concrete with guard towers. And, on the Bethlehem side of the wall, it is a canvas on which graffiti artists, professional and amateur alike, ply their brushes with messages for the world.

It has several different names.  Israelis call it a “security fence,” and claim it is needed to protect them from the “terrorists” in the West Bank.  Palestinians – and some internationals – call it an “Apartheid Wall,” meant to keep the Palestinians separate (but NOT equal!) in a position of depravation and oppression.

Those who strive to be “politically correct,” call it a “separation barrier,” a name that acknowledges both the Israeli desire for a “barrier” between themselves and their Palestinian neighbors and the reality of the fact that it does, in fact, separate the two peoples.

And those of us who deal with checkpoints, livelihood and agricultural gates, all designed to restrict movement by the Palestinians, simply refer to it as “The Wall.”

The Wall, we are told, is already twice as long and three times as high as the infamous “Berlin Wall” – and one can only hope that it will meet the same fate!  Regardless of what one calls it, it’s an abomination – blight both on the landscape and the psyche of the Palestinian people. 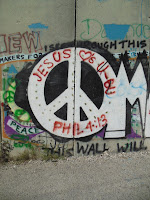 While it is generally acknowledged that Israel has every right to “protect” itself (although many would question how much “protection” is really needed), there remain several problems with (what I prefer to call) “The Wall.”

If “good fences make good neighbors,” it is because the fences are placed on the property line – not intruding into one neighbor’s land.  A major problem with The Wall is that Palestinian land was confiscated to build it – and major portions of The Wall are well over the internationally recognized “green line” (border approved in the UN partition plan of 1948 and subsequently upheld in International Court) deep into Palestinian territory.  The “green line” is said to be something less than 400 kilometers; yet The Wall will be nearly 800 kilometers long when construction is completed. 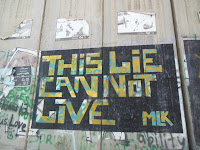 In the meantime, The Wall stretches across many thousand dunams of Palestinian farmland – land that farmers either cannot access at all or requires a system of permits and agricultural gates, which severely limits access.

Another problem with The Wall is the ingress and egress.  People who live inside (i.e. Palestinians) cannot leave without permits, and these can be difficult to obtain.  Men, in particular, younger unmarried men – or sometimes even married men with no children – are rarely granted permits.  And, even if someone is lucky enough to be granted a permit, passage through The Wall involves checkpoints (see March 13 blog post) and long waits.

The “bottom line” is, in my humble view, by keeping the two people apart, The Wall keeps them from getting to know each other as people.  And it is very difficult to talk peace through concrete and barbed wire!
Posted by Dee at 9:30 PM