The latest story of settler “incursions” onto Palestinian farmland comes from the city of Sabastiya, a historical place that goes back 10,000 years.  The ancient site of Samaria, Sebaste was named in honor of Caesar Augustus who gave it to Herod the Great.  If this is sounding faintly Biblical, it should – the modern-day city (population about 4,000) is home to Biblical and other historical sites (a church-turned-mosque in which John the Baptist was allegedly beheaded is sited here, as are other ancient structures).

But my EA colleague and I are not here on this sunny morning to tour the ancient sites.  We are here because the residents of the city have organized a peaceful demonstration to protest the dumping of raw sewage on their farmlands, and they have asked that we accompany them as a “protective presence.”

As is true of most Palestinian towns, the farmlands are not attached to the residents’ homes, but are located a short distance away.  As is also true in these days of Occupation and the Wall, the farms are located near a settlement, which makes access difficult.  In Sabastiya, this access is not through agricultural gates, but rather requires “coordination” with the settlers and soldiers – a process that causes many problems in and of itself.

The land is mostly planted in olive trees, but other crops grown in the area include wheat, dates, and tomatoes.  And, while the farmers have had previous problems with the settlers, such as destroyed olive trees, and wild boars being turned loose in the area, the sewage problem is relatively new.


“[The settlers] opened their sewage pipes to our land and the water reached us in December (2012),” says Ahmad Kayed, Coordinator of the Popular Committee for Sabastiya and organizer of this demonstration.  The settlement of Shave Shomeron has been around since the 1970s and, although there have been occasional sewage spillages in the past, this act is both deliberate and egregious.

Not only does the sewage contain human waste, he explains, there are also aluminum, leather and steel factories in the settlement, with their resultant pollution.  “The water is still running.  There are too many microbes; we can’t do anything with the land,” he says. 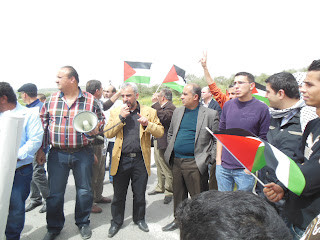 The protest, which attracted about 100 people, including other internationals, was a peaceful one, although there was some question about that at the beginning.  Israeli soldiers had entered the home of the imam who was to lead the prayer for the march at 4 in the morning to “warn” him not to participate.  And soldiers were reported to be waiting just across the main road from the protest site.

But the group remained orderly as they prayed, waved flags, listened to speeches and held signs.  “This is our land Get the S—T out of it,” – in both English and Arabic – was a popular slogan.  And, of course, it was not intended as a swear word; it was a literal statement of truth. 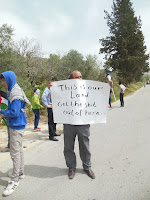 Towards the end of the demonstration, a man took the microphone and spoke in English.  “We are for peace and the defense of the land,” said Basel Rushdi Abdulhadi, a citizen of Sabastiya. “ We especially hope that Americans will listen and give us the right and the opportunity to defend our land.   “We want Obama to be an honest partner in the peace process and not just give the Palestinians words without action.”

Back in the center of the town, I noticed a sign recognizing the receipt of USAID money for “rehabilitation of the tourist route.” 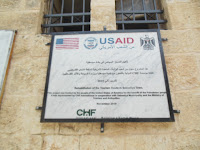 While I thought it a nice gesture, I thought that – just maybe – the US could be of more assistance if they would open their eyes to the truth of how US money given to Israel helps to prolong the Occupation and delays an ultimate peace


If you want to read more about the sewage discharge in Sabastiya: http://palsolidarity.org/2013/02/a-settlements-bio-war-against-the-ancient-city-of-sabastiya/