Rev. Alex Awad became a refugee when his family was evicted from the Jerusalem home that had been theirs for generations in the 1948 “Nakba.”  He lost his Palestinian citizenship in 1967, when the Israeli government denied Palestinians who were not “home” at the time of the 6 Day War the right to return to their native country.  Awad was studying in Europe at that time. Unable to return home, he enrolled at a college in Tennessee where he met his wife Brenda.

Eventually, the Awads became missionaries with the United Methodist General Board of Global Ministries, and were able to return to Palestine in that capacity, with Alex working as the Dean of Students at Bethlehem Bible College and Brenda working alongside him as development liaison officer for the college.  Alex also served as pastor of the Jerusalem Baptist Church, and both Awads worked with other Methodist missionaries and the indigenous Christian population in the Holy Land .  Upon the Awad’s retirement in 2015, they left Bethlehem and moved to Eugene, Oregon, to be close to children and grandchildren. 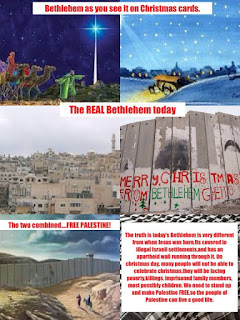 Rev. Awad’s story – of loss and pain and renewal – is not by any means unique in the narrative of that bit of land that three faiths call “Holy.”  Throughout his life, he has written and spoken of his story – the story of the Palestinian people.  He is the author of Palestinian Memories; the Story of a Palestinian Mother and Her People and Through the Eyes of the Victims.  Both books discuss the Israeli-Palestinian conflict from the perspective of a Palestinian Christian. Rev. Awad is also the author of numerous articles on the conflict and on Christians in the Holy Land, theology of the Land, Christian Zionism and interfaith dialogue.  He is an internationally known speaker on these subjects.

I first met Alex and Brenda when I visited Bethlehem with a delegation from the United Methodist Church in 2008.  A CD of Christmas music from the Bethlehem Bible College that I bought on that trip is part of my holiday music repertoire.  And, while I am delighted to have the Awads as “neighbors” in the Pacific Northwest, I share their sadness at having to leave Bethlehem.

This time of year, when friends in the Holy Land post photos of the Christmas tree lighting in Nativity Square, or when I listen to “Silent Night” sung in Arabic, I return to Bethlehem in my dreams.  And I pray that the Holy Land will remain truly “Holy” for all – no matter their faith.
Posted by Dee at 1:05 PM