I look out my window and it’s raining.  A gentle summer rain – actually unusual for Oregon in July, but not unheard of.  And then I read a solicitation, asking for contributions to something called “WASH” (Water, Sanitation and Hygiene Program) through the United Methodist Committee on Relief (UMCOR), and read that 668 million people throughout the world do not have “reliable access to clean drinking water.”

And, because the (illegal Israeli occupation of) Palestine is never far from my thoughts, my mind immediately flies to another “factoid” – that Gaza will run out of potable water by 2020.  Or sooner.  And that 95% of tap water in Gaza is already contaminated!

Yet the UMCOR appeal doesn’t mention Gaza.  It also doesn’t mention the West Bank – or the fact that the Israeli government is stealing the water from under the Palestinian land – even before it steals the land itself for its relentless, unceasing settlement building!  So I write to UMCOR to ask them if Gaza and/or Palestine are included in the WASH program.  And they tell me, “No; it is too difficult to get partners in Gaza.”

A few years ago, I was in Zimbabwe, in a small village near Victoria Falls.  The village was dry, brown and hot.  To get water, the women of the village would walk several miles to the nearest well, fill containers and carry them home on their heads.  Yet the grounds of the elegant Victoria Falls Hotel were green and lush, with sprinklers to keep the vegetation attractive to the rich tourists staying there.

But my correspondence with UMCOR doesn’t include a mention of Zimbabwe either – probably because it is “too difficult” to get partners in that politically and economically unstable place.

(Later, someone else from UMCOR writes to tell me that there are some small projects that are doing limited work on water resources in the West Bank and Gaza, but they aren’t the sort of projects that are attracting the resources that WASH does.  I didn’t ask about Zimbabwe.)

At the United Methodist General Conference this May, the United Methodist Women sponsored a demonstration for water rights, highlighting the crisis in Flint, Michigan.  Local Palestinian rights activists immediately jumped on that bandwagon to add their voices, “From Flint to Gaza – Water is a Human Right!”  It wasn’t the first time this parallel had been made – and it won’t be the last! 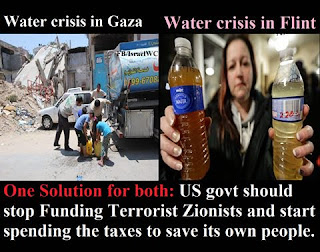 For water is, indeed, a human right – and the basic necessity of life.  It shouldn’t be a political issue – we shouldn’t have to think about who will benefit from programs designed to provide this resource.  And just because it is difficult to find a “partner” on the ground to provide the services needed, that is no reason to turn to another location where the need may be as great, but may also be lesser, just because it is easier to get a “partner” there.

There are no answers – only questions.  And if anyone reading this knows of anyone who is working to get clean water to the people of Gaza – and Zimbabwe and Palestine – please let me know!
Posted by Dee at 8:37 AM