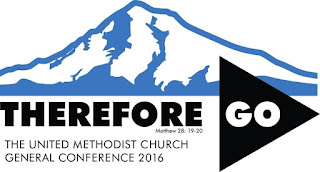 Say a prayer – or many! – for the United Methodist Church as it holds its quadrennial international convention (aka “General Conference”) in Portland May 10-20.

Say a prayer for the delegates – who will travel from Africa, from the Philippines, from  South America, from Europe and from all over the United States – and who will come with their own unique personalities and perspectives on the issues that they will discuss, debate, and ultimately vote on.

And, while this convention will cover a large number of issues that I believe are important (LGBT rights in the church context, climate change, racism, to name but a few!), the focus of my efforts during these 10 days in Portland is to help make the Church more aware of the evils of Apartheid as it exists in Palestine/Israel, and to pass resolutions that will remove the Church’s complicity with the Occupation.

Of course, there are a number of people and organizations who share this goal.  United Methodist Kairos Response (www.kairosresponse.org) was formed prior to the 2012 General Conference as a way for United Methodists to answer the urgent call from Palestinian Christians in Kairos Palestine:  A Moment of Truth (http://www.kairospalestine.ps/index.php/about-us/kairos-palestine-document) for “effective action to end the Israeli occupation and achieve a just peace in the Holy Land.”

UMKR has many partners in this effort.  Other churches who have passed divestment resolutions (United Church of Christ, Presbyterians, Quakers) are pulling out the stops to help, along with national and international organizations like Jewish Voice For Peace, Friends of Sabeel, Americans United for Palestinian Human Rights, and local organizations like Occupation Free Portland.   We are also allied with a number of movements that promote equality for all – regardless of race, gender and sexual orientation – because we share the common goal that is set forth so clearly in the Pledge to Allegiance, “…liberty and justice for all.”

A major path to that goal, we believe, is divestment from companies that contribute to the Occupation.  This is NOT – as opponents to Boycott Divestment and Sanctions (BDS) would have one believe – anti-Sematic.  It has nothing to do with the Jewish people, or, indeed, the Israeli people.  BDS targets companies – often American companies – who make products and/or provide services that allow the Israeli Government to maintain a firm foot on the back of Palestinians’ collective necks.

Boycotting, in this context, is targeting companies who make products in the illegal Israeli settlements (whose very presence contributes to the oppression of the Palestinian people).  Recent boycott targets have been Soda Stream, (who eventually moved its operation out of the West Bank to try to recoup the losses it had suffered from the boycott) and Ahava, a cosmetic company who not only has a plant in the West Bank, but who uses minerals from the Dead Sea (thus depleting this natural resource and causing an environmental disaster to go along with the human rights abuses!).  At its 2012 General Conference, the United Methodist Church passed resolutions supporting the boycott of settlement products, although it is expected that this issue will be revisited in 2016.

Divestment from companies who support the Occupation is, however, the focus of legislation that Methodists will be considering this time around.  Four years ago, divestment resolutions were proposed, but were not passed.  This year, similar resolutions, targeting Caterpillar, Motorola Solutions and Hewlett Packard are also on the table, and the stakes are even higher.

UMKR is but one of many groups, individuals and Annual Conferences who have proposed resolutions that would have the church divest from one or more of these companies.  Much time and effort has been spent, and will continue to be spent, to educate the delegates about the true nature of the Occupation, and why BDS, a non-violent tool with a history in the American Civil Rights movement and the ending of Apartheid in South Africa, is the right action – and why now is the right time!

Pray for us all – and especially for the Palestinians, a few of whom will travel to Portland to add their voices while the great majority continue to suffer at the hands of an unjust and illegal oppressor!