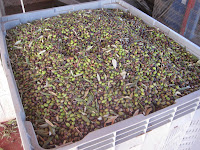 Reading Facebook posts from Palestinian friends, EAs and former EAs, I am nostalgic for the time I spent there.  Speaking to a group of senior citizens here in Portland, I remember the good times – and the sorrows.  And then it comes to me, this is autumn – a time for remembering, and, in Palestine, olive harvest time.

I’ve never been there during the olive harvest.  The year that I was supposed to go (2011), I was in the hospital and had to turn the trip over to my friend, Betty, who led 20 people to Wadi Fukin for the olive harvest – and to other Israeli and Palestinian sites to meet and talk to the people.

In 2012 I was in Palestine in the autumn, but in November, when the olive harvest was but a memory, and I was focusing on the people and the issues of the Occupation.

My EA experience was in the spring.  I saw olive trees putting out their silvery green leaves, and watched them being nurtured by farmers going through agricultural gates into the “seam zone.”  In April, the olives are tiny buds, with but a bare promise of what the harvest will bring.

But now – oh to be in Palestine now and to see the growers spread clothes under the trees and to gently shake the olives from the branches!   It’s a time of rejoicing, a time of work and a time of satisfaction when (if!) the olives are successful harvested.

Sadly, for many farmers, olive harvest is a time of bitter tears – a time of mourning for what is lost.  Many trees have been destroyed – some by settlers uprooting them, burning them, or dumping sewage on them - some by the inability for the farmer to care for them.

Under the draconian regulations that overlay land in the so-called “seam zone” (that no-man’s land between the Wall and the actual border between Israel and Palestine), farmers have limited access to their land or, indeed in many cases, have no access at all.  Even with limited access, it is impossible to properly care for the land. Olive trees cannot be pruned, or watered – and the neglected trees bear crops of far lesser quantity and quality than those that have been nurtured for the entire season.

I read recently that 80,000 olive trees were destroyed in Palestine in the past year.  This is a huge loss for a people whose livelihood depends upon the land – and to whom the olive trees are almost a part of the family.  It is easy to destroy an olive tree.  A bulldozer, a spark in the dry desert heat, sewage draining from a nearby settlement, a fence that keeps the caretakers away.
It is not as easy to destroy a people.  The Palestinians have roots that are older and deeper than those of the most ancient olive trees – their forefathers were there 2,000 years ago and they have no intention of leaving the land.

Because of the Wall and the restrictions of transporting commercial items through the checkpoints, with a few exceptions, farmers are limited in where they can sell their crops.  One of the happy exceptions is Canaan Fair Trade, an agricultural cooperative that produces olive oil and other food products, and markets them in the U.S. and Europe.  In the Portland area, as in many other places, they are sold at local churches and at Whole Foods.

Next time you eat an olive, please give a thought to the Palestinian farmers!
Posted by Dee at 7:08 AM