A Gift from the Sea - or "You Can't Get There from Here!"


When I first learned that I’d be spending three months in Tulkarm, I did what every self-respecting researcher would do – I “Goggled” it!  Among other things, I learned Tulkarm was a medium sized city (60,000 people) in the northwest of the West Bank, had a “subtropical” climate, and was located just 14 kilometers (about 10 miles) from the Mediterranean.

I also learned that, thanks to checkpoints that started during the first Intifada, followed by the construction of the Wall in 2002, the sea is inaccessible to the residents of Tulkarm.  “The last time I saw the sea was in 1983,” one of our local contacts, a man who works with the Jewish peace organization B’tselm, told us.

“My children have never seen the ocean,” added Muawya, taxi driver and translator for our EAPPI team.  He told us that, once, one of his sons came across the term “wave” in a book – and, without a visual point of reference, it was a difficult concept to explain. 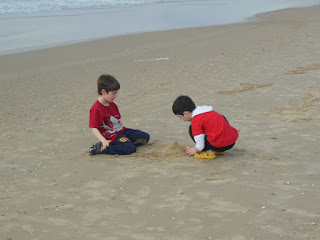 Muawya also told us that once he tried to take his wife (who has also never seen the sea) and four sons to the Dead Sea – “Not the same as the ocean, but it is water for them to play in,” he said.  After a drive of several hours, the family was turned back by Israeli soldiers with no reason given. The Dead Sea, by the way, is in the Jericho Valley, also in the West Bank, but, as is often the case here, road blocks, checkpoints and the Wall make travel from one place to another difficult, if not impossible.

Recently, I spent a couple of days off in Tel Aviv.  The coastal city is about 25 miles from Tulkarm, as the crow flies, but even for me, a Westerner with a passport that would let me cross the checkpoints easily, what was once a 45 minute journey exceeded two hours.  I was first driven to a checkpoint by a Palestinian driver, then, after a lengthy inspection of my passport by a bored, young soldier, transferred to a taxi with Israeli plates for the remainder of the two-hour journey.

In Tel Aviv, the unfairness of the situation struck me afresh!  Here I was, lying on this beautiful beach, watching children playing in the waves and building sand castles.  And only a short distance away, a whole generation of children was growing up without ever being able to enjoy the simple pleasure of a day at the beach.

.I gathered shells and brought them back to Tulkarm for Muawya to add to his collection of “beach memorabilia” from other EAs.  Hopefully, some day he and his family will be able to return these gifts to the sea in person!