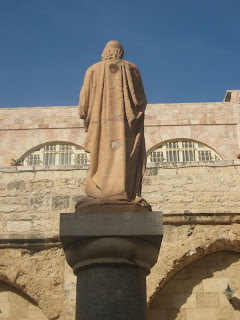 As the soothing sounds of holiday music fill my home, I find myself thinking about Bethlehem – the “little town” of song and scripture, and the modern city of walls and restrictions.  What Christian hasn’t listened to the words of this popular hymn and formed a mental picture: the rustic inn that had no room, the stable, the animals, that star?

But it’s far more difficult (both logistically and emotionally) to view the reality that is Bethlehem today.  First, there is the Wall around it – 30 feet high of reinforced concrete with checkpoints and armed soldiers to control ingress and egress.  The Wall doesn’t follow any natural border, but meanders its way around that part of Bethlehem that the Israelis have decided that they don’t want – yet anyway!  It cuts a swath around Rachel’s Tomb, so Jewish tourists can make that pilgrimage without having to go through checkpoints (thus completely cutting off access by Palestinian Christian and Muslim pilgrims to a place that is also of religious significance to them).

And there are the tracks still rutting the streets 11 years after Israeli tanks rolled into town on yet another mission to destroy and punish.  (Locals say that they won’t re-pave the roads because the tracks improve traction when the hilly streets are icy – a not infrequent occurrence in wintertime!)

Let’s pay a visit to the Church of the Nativity during this, the imputed month of Jesus’ birth.  Before you step inside, take note of the bullet holes in the exterior wall – “souvenirs” of the heavy shelling aimed at Palestinians seeking refuge in this holy place during the 2001 siege.  Even a statue in the church’s courtyard bears bullet marks.

And you say you’d like to visit the church – to see the place where Jesus (according to tradition) lay?  No problem!  These days, the Israeli tour busses are happy to drive through the checkpoints (no “security” issues for them!), and deposit tourists at the church for a brief visit.  But if you’d like to wander the streets and check out the shops and cafes – forget it.  You will be told it “isn’t safe” to wander the streets – that the “Arab terrorists” may attack at any time.  The real reason, of course, is that they don’t want you to discover that the Palestinians who live in Bethlehem and work in the local businesses are people like the rest of us – with hopes, fears, joys and sorrows.

And now, in the wake of the good news that the UN has approved Palestine’s bid for “observer” status, comes the latest blow to Bethlehem – The Israeli government is moving forward with plans for a development (i.e. “settlement”) that would separate the West Bank cities of Ramallah and Bethlehem from Jerusalem – thus preventing the possibility of a viable, contiguous Palestinian state!  Most of the world, including the United States, has a long history of opposing this development, and it is widely viewed as the Israeli “punishment” to the Palestinians for their successful UN bid.

So, when you hear that carol, or see a star, or think about that baby in the manger, please pray for that little town of Bethlehem – and for all the beleaguered people who continue to live under occupation and oppression!